You Are Never Too Old To Learn a New Language: Marta Perim

There is a saying in Brazil, "Antes tarde do que nunca", or in other words, "Better late than never". I'll be turning 60 years old next month and ever since being a teenager, it has been a dream of mine to study English in the UK. After working hard all my life, I decided that it was time for a little  quality "me" time. 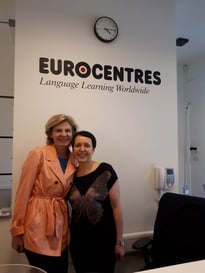 ‘ I can say, without a doubt, studying at Eurocentres London Greenwich-Eltham has literally been one of the best experiences of my life.’

The school was recommended to me by a friend of mine, Jackeline Guasti, Experimento Franchise (language travel agency), in Vitoria, E.S. (my city). She told me about the school's best selling points, such as the great teaching team, the use of the latest teaching techniques and methodologies in addition with the latest technology, such as the Interactive Whiteboards and Wifi throughout the school building.  With my daughter Emanuela’s support, I made the final decision. The building itself is very modern with spacious and well-lit classrooms, and the school building is surrounded by a beautiful countryside where you can see the horses strolling through the green pastures and lovely  yellow butters cup. Moreover, the school is only a 25 minute train ride to central London!

When I arrived at the school, I had an extremely warm welcome from both the Client Services and Academic team, I also received a lot of personal attention from my teacher (Aneta). As the weeks passed by I learned more about the school, the English language and Eltham, and I fell in love with it.

Eltham itself was a fantastic surprise for me, I felt like I was staying in a charming village in the countryside, but with the huge advantage of having such easy and quick access to central London. In Eltham, you can visit the Eltham Palace (for free!) which is only a 2 minute walk from the school, and enjoy the beautiful gardens and learn about the history of this fascinating building which goes back 600 years! There are plenty of shops, bars and cafes in the local neighbourhood, and whilst I was there, a brand new cinema opened up.

Besides the fantastic lessons, I also took advantage of the many and varied activities offered by the school's Social Programme, such as visiting cultural destinations like Stonehenge & Bath, Oxford, the Lake District, Liverpool and Edinburgh. The school also offers great half price deals on tickets to the top West End musicals, such as Lion King and Aladdin. The school also organised plenty of activities in the school to encourage students to socialise and mix together, which means you get to practice the language you have learned in the classroom.

Even when there was something I wanted to do, which was not in the Social Programme, the Client Services team were always very helpful. When, for example, I wanted to get tickets to go and see Vivaldi's "Four Seasons" and the ballet (Romeo & Juliet) at the Royal Opera House in Covent Garden (a dream come true for me), they were always on hand to help me order tickets anD give me directions. They also helped me with my trip to Highclere Castle, where the TV series "Downton Abbey" was filmed, which was absolutely fabulous. 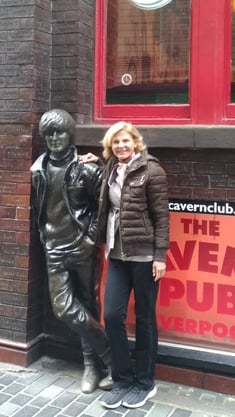 London itself, is a cultural gem, and the school provides plenty of information on the best places to visit, such as the National Gallery, the Natural History Museum , the British Museum,  where I saw the Rosetta Stone that I had studied about when I was twelve years old . I also saw many more wonderful galleries, exhibition centres and world class museums, many of which are free to enter! I got to cross the famous zebra crossing at the Abbey Road, where the famous Beatles album was photographed ( I’m a huge Beatles fan!). My grandson Gustavo, 3 years old, and my granddaughter Georgiana are fans of them too. Their favorite song is “Don’t let me down".   I also visited two Leonardo Da Vinci Museums (one of my favorites) exhibition ( 500 Hundred Years of his death) –- at Cardiff and Liverpool, as well as the Van Gogh exhibition at the Tate Britain Museum where I saw lots  of paintings by J.W. Turner that I had only seen in the movies.

Unfortunately, I did not have the chance to paddle through the Thames River, and was not invited to the 5 pm tea with the Honorable Majesty , Queen Elizabeth II. But oh well, maybe next time!!

'I have so many wonderful and happy memories of my time at Eurocentres and my time in London; I really do recommend this to be one of the best ways to spend your time in another country whilst having the opportunity to meet so many people from other countries and make a lot of friends. It was honestly the trip of a lifetime'.

Would you like to get language learning tips sent straight to your inbox? Sign up today!
Trustpilot